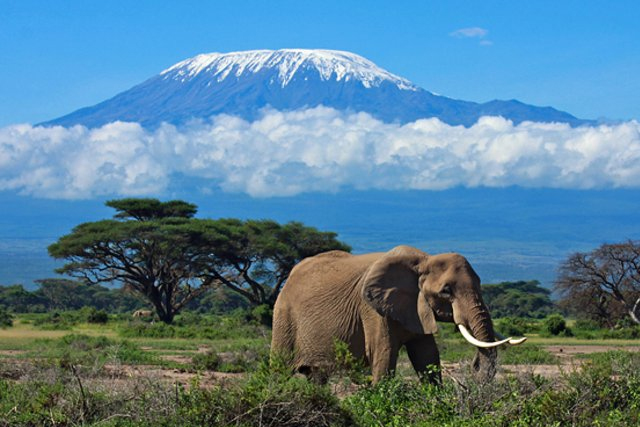 Mount Kilimanjaro is a composite volcano comprised of lava, volcanic ash, and tephra.  The mountain, affectionately called “Mt. Kili” or just “Kili,” was created from three different volcanic cones that include: Kibo, Mawenzi, and Shira.  Kibo is the taller of the three and provides the Uhuru Peak, which is the highest or summit point of the mountain.  Kibo also features a 1.5 mile wide crater.

Although it is a volcano, it is considered inactive with no record of eruptions noted in history.  Mount Kilimanjaro is an incredibly majestic mountain and one of the most iconic landmarks and wonders in all of Africa.  Mt. Kili features seven different peaks but stands as one spectacular mountain.

During the declaration ceremony on February 11, 2013 in Arusha, Tanzania, Dr. Phillip Imler, President of Seven Wonders stated, “It is the pinnacle wonder of Africa, and as many know, it is affectionately known as the rooftop of Africa.”  Learn more about what makes Kilimanjaro one of the Seven Wonders of Africa.

Mt Kilimanjaro features a variety of ecological zones, which adds to the unique characteristics of this mountain.  An additional unusual feature of the mountain is that it is void of the typical bamboo zone that is found on all other mountains in Africa with similar characteristics.  Mount Kili includes five different ecological zones that include the following:

With these varying ecological zones, this means that Kili is rich in biodiversity.  The mountain encompasses a variety of forest types that include the following:

Although rich in biodiversity, it is is limited with endemic species of any kind.  However, one of the few endemic species includes the groundsels.  The mountain is topped with snow year round adding to the aesthetic appeal.

What are the best ways to see the Mount Kilimanjaro?

There are numerous visitors and travelers who would like to see Mountain Kilimanjaro without having the ambition to climb or trek the mountain.  The most scenic or aesthetic view of the mountain comes from Amboseli National Park in Kenya.  Safari goers can enjoy the wildlife of Kenya’s national park and the breath-taking views of Mt. Kilimanjaro.

The majority of postcard and magazine pictures of Mount Kili come from this perspective.  As you drive from Arusha towards Moshi, there are some spots that provide good views of the mountain.  The challenge with these views is trying to capture the image without farms or other features that are not solely nature.

What are the best ways to experience the Mt. Kilimanjaro?

Climbing or trekking Mount Kilimanjaro is the best way to experience the mountain.  Whether your reach the summit or not, ascending up the mountain is one of the most exhilarating experiences or encounters with nature.

Mount Kilimanjaro features seven different official climbing routes.  The list of approved routes include the following: Machame, Marangu, Mweka, Rongai, Shira, and Umbwe.  The most scenic route is the Machame trail, however this route is considered one of the more challenging routes because of the steeper ascent.  Rongai holds the distinction of being the easiest route, however it is considered the least scenic.  The first question to answer before climbing Mt. Kili is whether you want to experience the best of the mountain or reach the summit?

Marangu is a second route that is also considered fairly easy.  It has even been given the nickname, “Coco Cola Route.”  Marangu features cabins for evening sleeping versus tents that are used on other routes.  This route is more scenic than Rongai and makes it one of the more popular routes.

The weather varies by months but more so by seasons.  Mount Kilimanjaro does not experience winter, summer, fall, and spring, but rather rainy vs. dry seasons.  They have the long rainy season which runs from March through May and the short rainy season which occurs in November and into December.

The temperatures are fairly consistent throughout the year with slight variations.  Considering the best and west times to climb Kilimanjaro, here is a look at the expected temperatures:

The summit is where the temperatures really matter.  The temperatures at the summit can be as low as -20oF up to 20oF (-29o to -7oC).  High winds can make the wind chill around -60oF.

When is the best time to climb Mt. Kilimanjaro?

Kilimanjaro may be the most famous mountain in the world with its own airport.  Mount Kilimanjaro International Airport located between Arusha and Moshi provides easy access to the mountain.  Landing at the airport may provide you with your first glimpse of the mountain.  The city of Arusha has a second airport which also provides easy access to Kili and is worth using if it provides lower fares.  The distance to the mountain is not bad.

Mount Kili can be climbed anytime of the year, but there are months that are better.  These better months are also accompanied with more people.  A bit of a tradeoff, when it comes to experiencing the mountain.  You do not have the typical summer vs winter considerations but rather rainy versus dry seasons.  Any drop in temperature combined with rain, mud, and wet clothes can ruin a trip and even result in an unsuccessful ascent to the summit.  Here is a brief look at the best times to go and the worst times to go:

Although accompanied with more crowds, the best months to climb or trek Mt. Kilimanjaro occur during the months of January, February and September.  It is weather so there are no guarantees, but these months provide the greatest probabilities for warmer weather, limited to no rain, and less cloud coverage.  This combination providers climbers with the most comfortable trekking experience.

The most iconic images of Mount Kilimanjaro are taken from the Kenya side of the park and most probably from Ambesoli National Park.  As usual, you want the early hours of the day for the best lighting.  You will be looking into the sun in the later part of the day.  However, images of Mt. Kili with a nice sunset in the background also makes for stunning photography.

The mountain is frequently covered with clouds, so if photographing Kili is the objective, then patience may be the most important part of your journey.  Again, the morning time of the day provides the greatest chances of the mountain’s visibility.  Clouds tend to set in as the day warms.