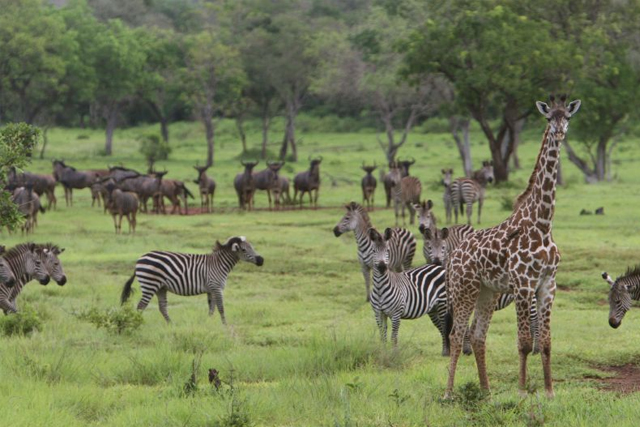 Selous Game Reserve was named in honor of the hunter and conservationist, S.r Frederick Selous.  The reserve has been declared a UNESCO World Heritage site based on the abundance and variety of wildlife and pristine natural environments.  Selous is comprised of areas in the reserve that are designated for hunting and other parts designated for photographers.

Statistically speaking, the Selous Game Reserve is one of the largest wildlife areas in the world.  The reserve encompasses at an of 21,000 square miles (54,600 sq km).  The reserve was established in 1922.

Aesthetically speaking, wildlife and pristine natural environments are what make Selous a unique and amazing experience.  In many cases, Selous has an abundance of wildlife that is not found in other reserves or national parks.  Here is a list of some of the wildlife that can be found in greater numbers:

The greater number of cheetah and black rhinos attract many visitors. Additionally, visitors will discover an abundance of sable antelope, hartebeest, eland, and greater kudu.  The reserve features one of the most abundant populations of hippos throughout Africa.

As a natural environment that has been hardly disturbed by mankind, the Selous Game Reserve features a variety of habitats adding to the ecological and wonder status value.  Travelers visiting Selous can experience any of the following ecosystems and vegetation types:

What are the best ways to see and experience Selous Game Reserve?

The Selous Game Reserve is all about wildlife.  It is one of the most populous game reserves in Tanzania and throughout Africa.  The best way to experience and see all that Selous Game Reserve has to offer is through a safari.  The majority of visitors will stay at one of the lodges in the reserve and take safari vehicles through the different circuits (roads) that criss-cross throughout the park.

The northern section of the reserve found along the Rufiji River is the area designated for photography.  Accordingly, this has become a favorite area for many travelers.  Many of the lodges are located in this area.  The best experience is a photographic encounter with some of the most amazing wildlife in all of Africa.

Selous Game Reserve has also established the opportunity for walking safaris.  This is one of the more personal encounters with wildlife.  Although animals tend to fear humans walking more than vehicles driving making it more challenging to get closer photographs.

Most of the remainder of the reserve is designated as a hunting area.  Although Seven Wonders would never recommend hunting, it is one of the more popular activities in Selous.  UNESCO has affirmed the legal protection bestowed upon the reserve and notes that a management plan is in place to protect the wildlife numbers.  As long as appropriate quotes are followed, the hunting should not negatively affect wildlife populations.

Tanzania and the Selous Game Reserve are close to the equator which means weather does not fluctuate much.  The temperatures remain fairly consistent throughout the year.  It is fair to say that it is either warm or hot and humid.  The nights are warmer in Selous as compared to most other national parks in Tanzania.

The bigger question is rain.  Selous features a continual rainy season that runs from November through May.  The majority of rain occurs as afternoon showers or thunderstorms.  In most cases, these are in out, but do occur rather regularly.  The temperatures during the rainy season can get as high as 86oF (30oC), which combined with the moisture from the rain creates a high humidity,

The months of June through October account for the dry season.  Temperatures are expected to be around 81oF (27oC) for a high and around 66oF (19oC) as a low during the evening hours.

When is the best time to visit the Selous Game Reserve?

The Selous Game Reserve can be visited year round.  The rainy season is fairly predictable and you should count on rain if traveling during this time of year.  The good news is that if rarely rains all day and the majority of rain occurs as afternoon showers.

The best time to visit Selous Game Reserve is during the months of June through October.  This is during the dry season and the temperature and humidity is more comfortable.  The dry season also helps find wildlife easier because they are frequently located around watering holes or at least nearby.  For some, one of the biggest advantages is the lack of mosquitoes during this time of year.  The photography and tourist area near the Rufiji River can get crowded at times, and some find it too dusty.  These are the only drawbacks of visiting during these months.

The worst time to go to Selous Game Reserve is during the months of March through May.  This is the rainiest part of the rainy season and you will find that many of the lodges actually close down.  Roads can be more challenging to navigate.  One of the most difficult parts is the high humidity, which makes it rather uncomfortable.  A highlight if you do elect to do during these months is the abundance of migratory birds that can be experienced.

There are no specific photography tips or insights for the Selous Game Reserve.  Photography tips will be added as experienced or discovered.  If you have a good tip, please forward that to Seven Wonders through the Contact page.