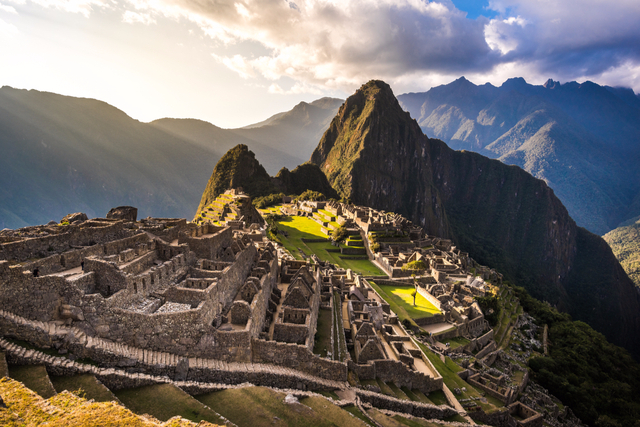 Here is the list of the official 7 Wonders of South America. The list is presented alphabetically and has no bearing on comparative significance (scroll through or click directly to a wonder below):

Basilica of the National Shrine of our Lady Aparecida 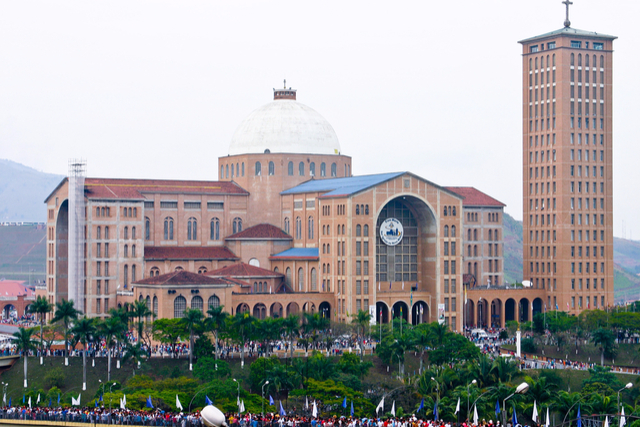 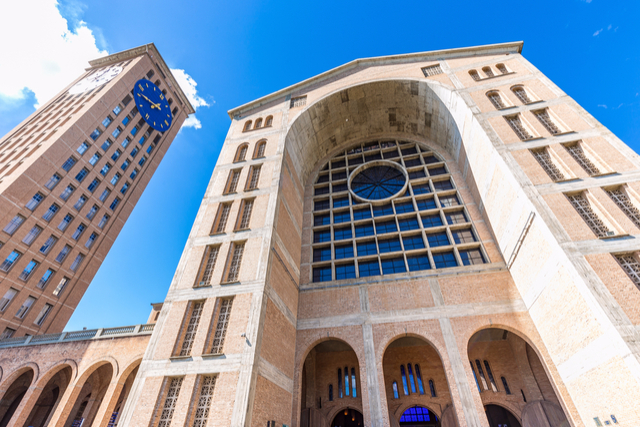 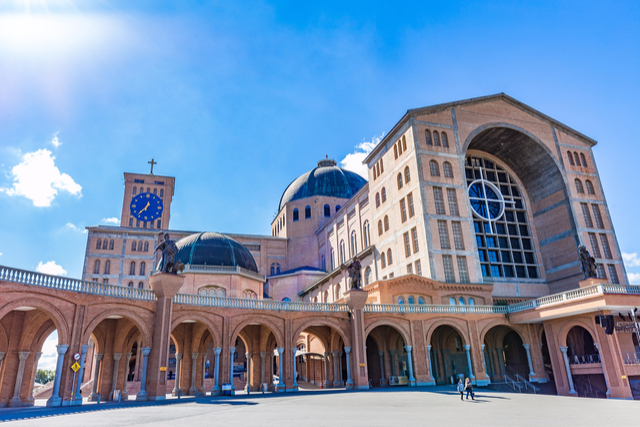 The Basilica of the National Shrine of Our Lady Aparecida was constructed following the Romanesque Revival style featuring a Greek Cross with arms that measure 617 feet (188 m) in length. The parking lot sprawls 2,930,000 square feet (272,000 sq. m) with the ability to hold 4,000 buses and 6,000 cars.

The grounds of the basilica are also home to a medical clinic, restaurants and a shopping mall. Construction was completed in 1980.

Basilica of the National Vow 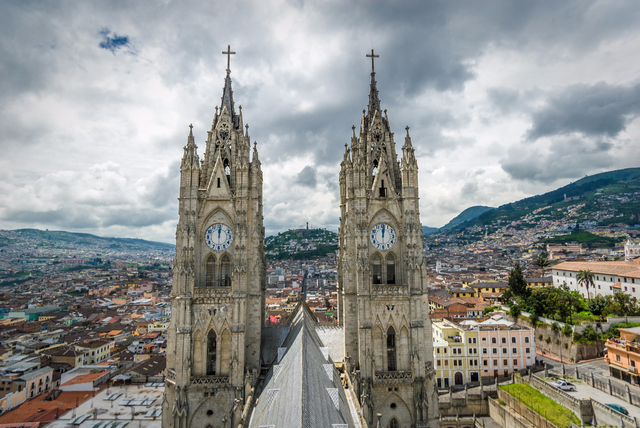 The Basilica of the National Vow, locally known as Basilica del Voto Nacional, is a Roman Catholic church. The basilica is located in Quito, Ecuador. It has the distinction of being the largest neo-Gothic basilica in the Americas. 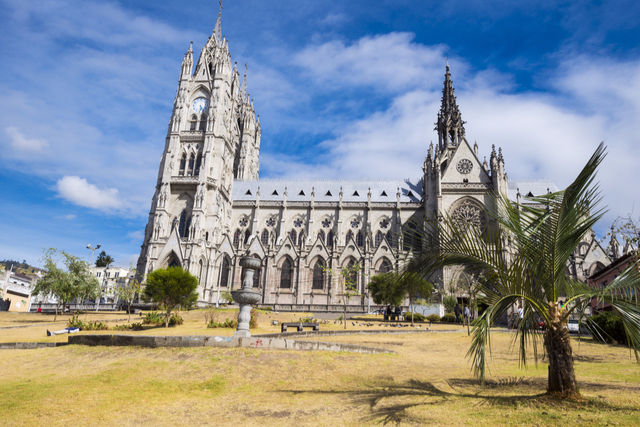 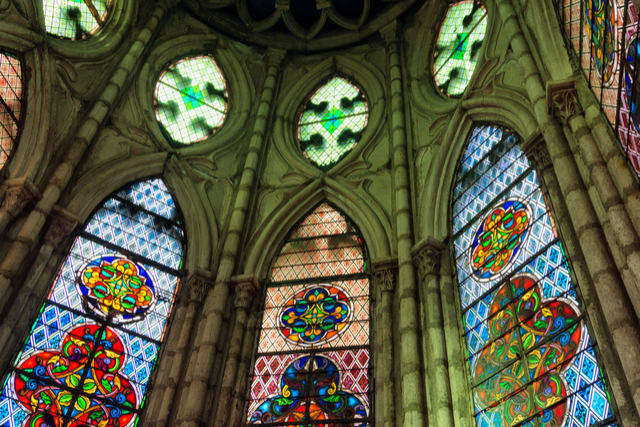 The Basilica of the National Vow is home to fourteen bronze images. Eleven of these are related to the apostles and three of them are for historical evangelists. The basilica also has notoriety for its grotesques that are in the form of local Ecuadorian wildlife such as the giant tortoises of the Galapagos Islands, the iguana, and armadillos. 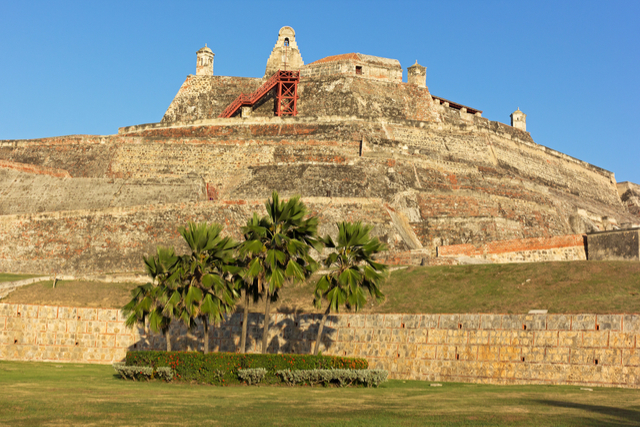 The Castillo San Felipe de Barajas is a fortress located in the city of Cartagena, Colombia. It is recognized as one of the largest if not the largest fortress in South America. The fort is 135 feet (41 m) above sea level. 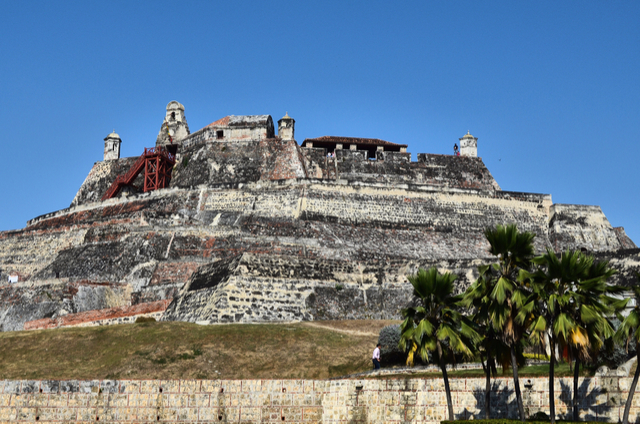 Castillo San Felipe de Barajas is a massive fort situation on the Hill of san Lazaro. It was such a strategically chosen location, that the fortress easily dominated any approach whether by land or sea. Because if it grandeur and complex maze of tunnels and access, it is deemed the most formidable defensive complex of Spanish military architecture. 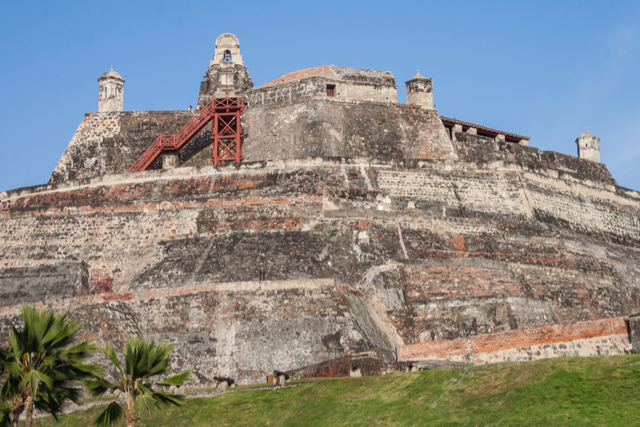 Castillo san Felipe de Barajas and 3,000 soldiers held off a month long attack by English Admiral Edward Vernon and his naval arsenal of 186 ships and 23,000 men. It is considered one of the greatest defeats in English naval history. 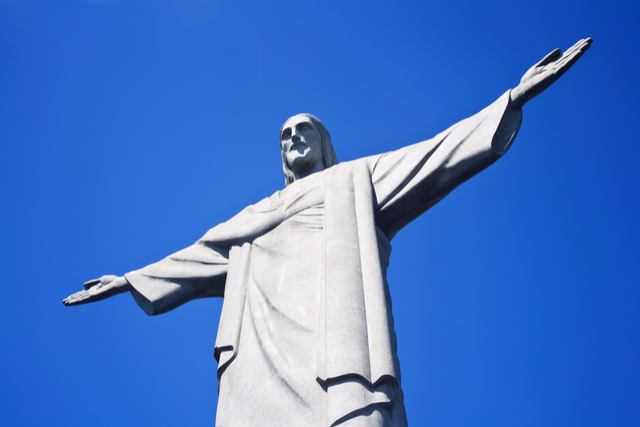 Christ the Redeemer is an Art Deco statue of Jesus Christ. It is located in Rio de Janeiro, Brazil overlooking the Harbor of Rio de Janeiro, which is one of the Seven Natural Wonders of the World. Construction occurred over 9 years completing in 1931. 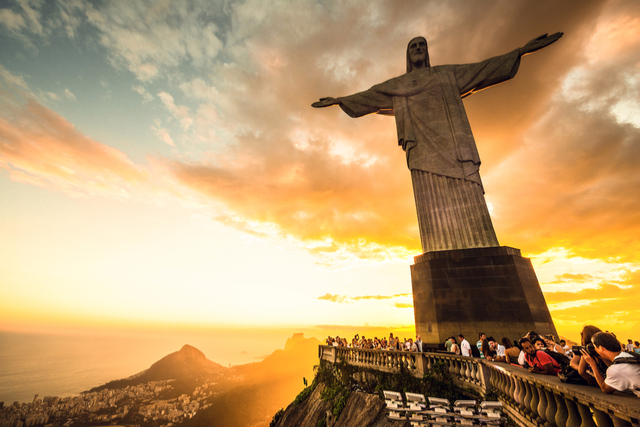 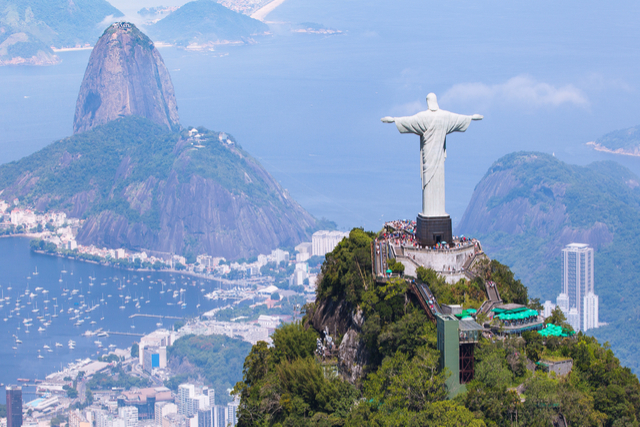 Christ the Redeemer is located atop Corcovado mountain at 2,300 feet (700 m). It is one of the most iconic representations or symbols for the Christian faith around the world. It is also a synonymous symbol for both the country of Brazil and the city of Rio de Janeiro. 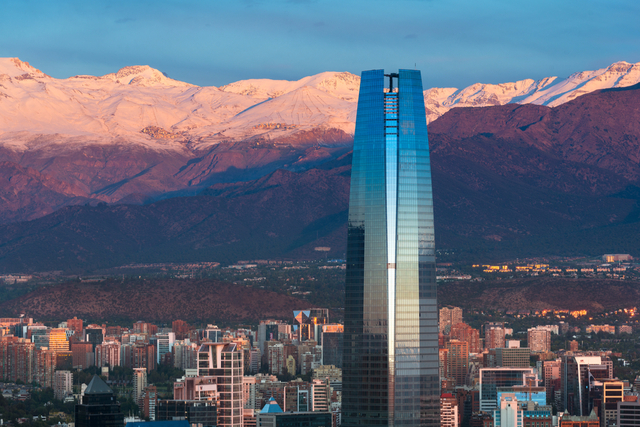 The Gran Torre Santiago, also called Costanera Center Torre 2, is a skyscraper in Santiago, Chile. It is the tallest building in South America with the highest occupied space as well. It is a 64-story skyscraper. 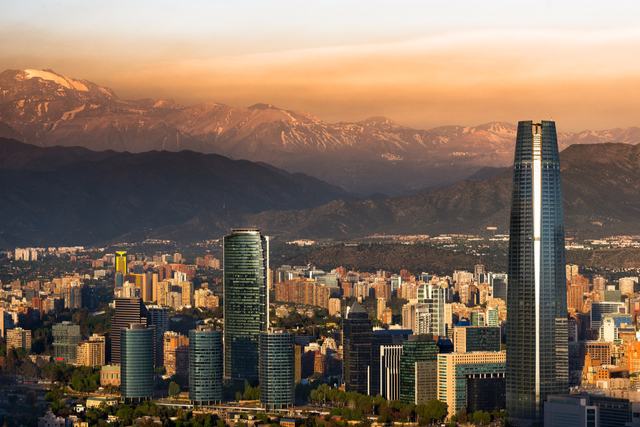 Gran Torre Santiago reaches a height of 984 feet (300 m) with the top floor occurring at 856 feet (261 m). Construction was completed in 2013 over a span of approximately 7 years. On observation desk is located on floors 61 and 62, which provides a full circle view of the city and surrounding area. 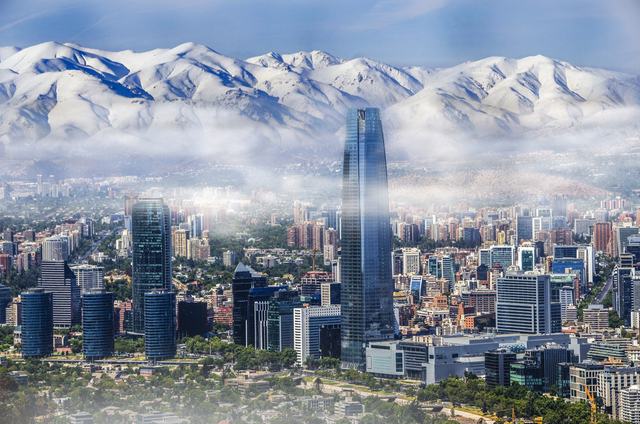 Gran Torre Santiago is part of a larger complex, which also includes the largest shopping mall in South America along with two hotels and an additional two office buildings. 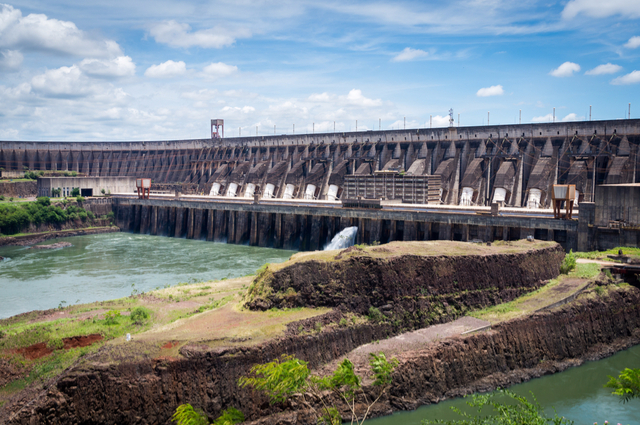 The Itaipu Dam is a hydroelectric dam located on the Parana River on the border of Brazil and Paraguay. The dam set a world record producing the most energy of any dam in the world. The record was sat at 103,098,366 megawatt hours (MWh). 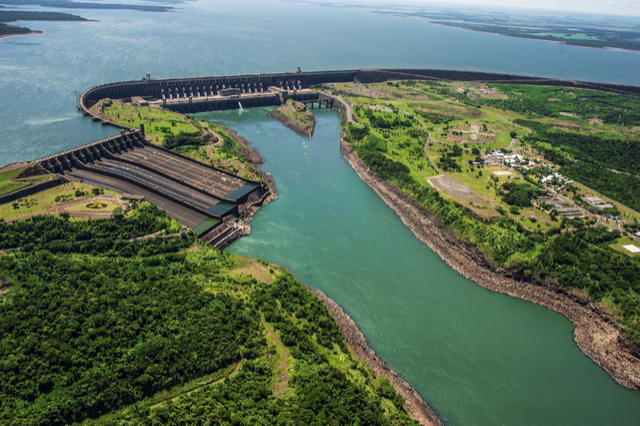 The Itaipu Dam has a spillway capacity of 2,200,000 cubic feet per second (62,200 cubic m/s). The American Society of Civil Engineers designated Itaipu Dam with the honor of being one of the Seven Modern Wonders of the World.

The iron and steel used to create Itaipu Dam would be able to create 380 Eiffel Towers, whereas the amount of concrete used could create 210 football stadiums. 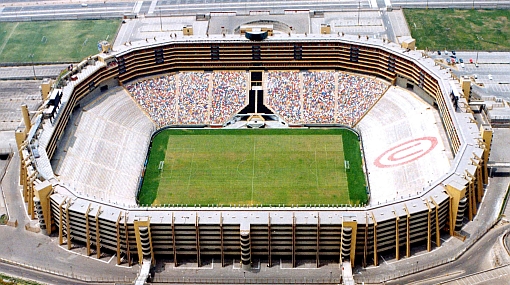 The Monumental Stadium U is a football (American Soccer) stadium located in Lima, Peru. It is the home field for the football Club Universitario de Deportes. It is the largest stadium in all of South America. 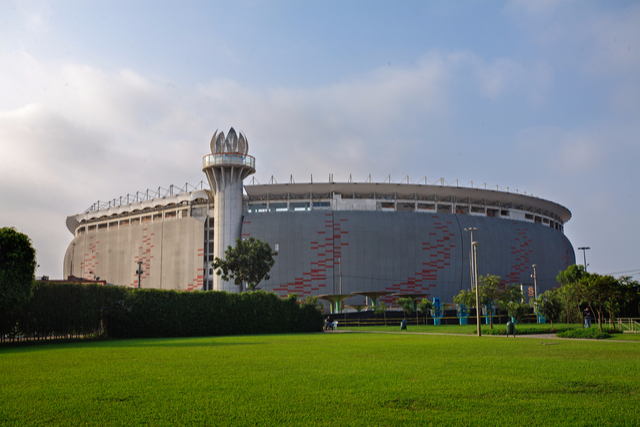 The Monumental Stadium U has a capacity to hold 80,093 spectators for the sporting events. Construction occurred over nine years with completion occurring in early 2000. It opened July 2, 2000. 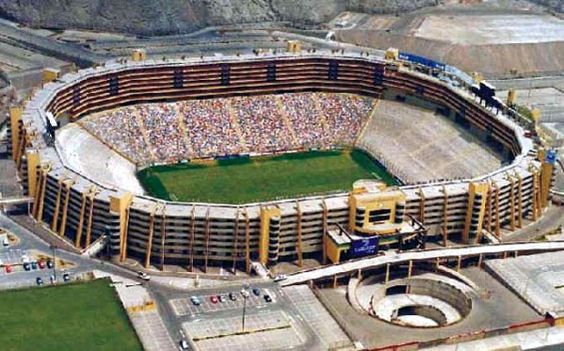