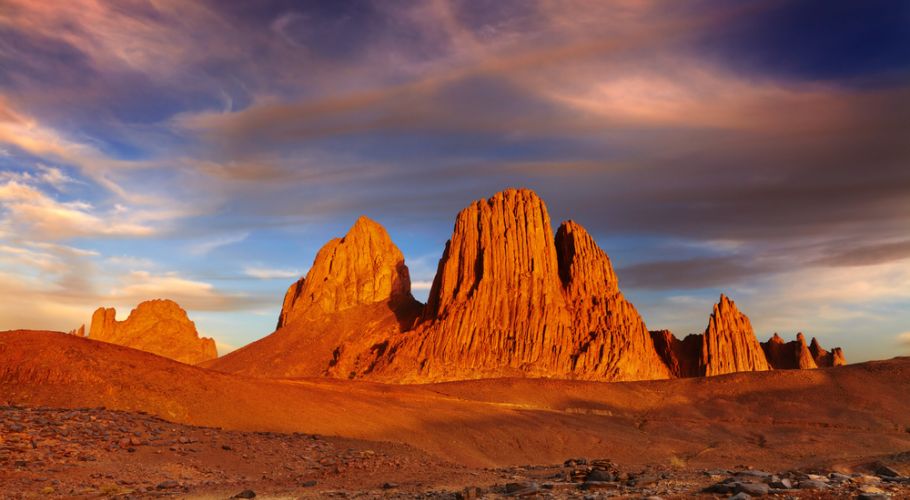 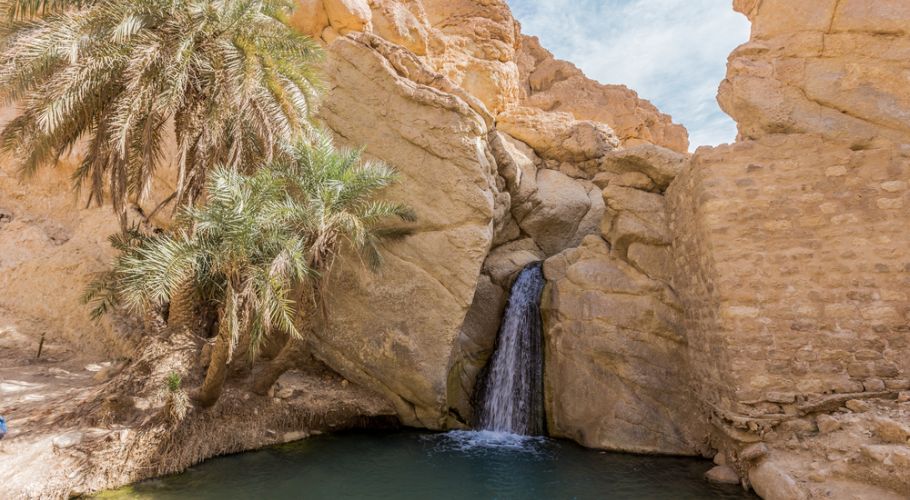 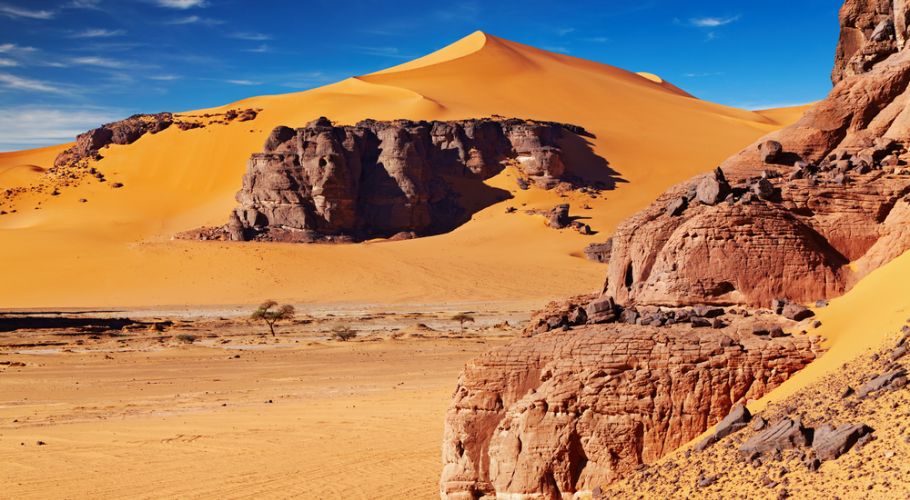 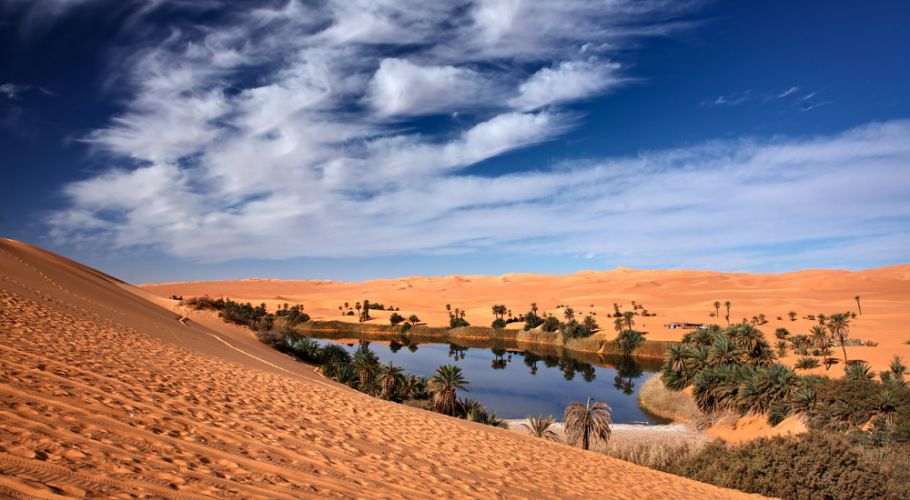 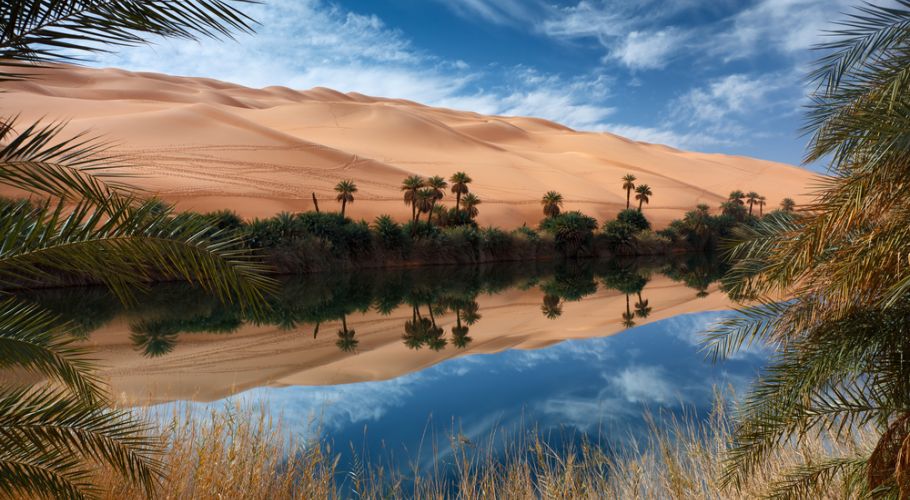 The Sahara Desert is a dry desert located in the northern region of Africa. It is affectionately known as “the Great Desert” taken from the Arabic translation of the name.  The desert extends from the shores of the Mediterranean in the North, the Red Sea in the East, to the shores of the Atlantic coast, to the tropical savanna of the Sahel in the south.

Altogether, the Sahara encompasses 3,600,000 square miles (9,400,00 sq. km).  The Sahara Desert account for approximately 1/3 of the entire continent of Africa.  The sand dunes found throughout the desert can reach as high as 590 feet (180 m).  When it comes to speaking about the Sahara Desert, it is fair to say that “big” is an understatement.

During the declaration ceremony on February 11, 2013 in Arusha, Tanzania, Dr. Phillip Imler, President of Seven Wonders stated, “The Sahara Desert encompasses 11 different countries making it Africa’s largest wonder.”  Learn more about what makes the Sahara Desert one of the Seven Wonders of Africa.

What makes the Sahara Desert a natural wonder?

Statistically speaking, the Sahara Desert is largest dry or hot desert in the world.  The Sahara Desert is approximately the same size as the countries of China or the United States.  Their are 11 different countries that in whole or in part contribute to the size of the desert.

Aesthetically speaking, the Sahara Desert has many features throughout the desert that could be argued as wonders in their own right.  Mount Emi Koussi is the highest point in the Sahara reaching a peak of 11,204 feet (3,415 m).  The Libyan part of the desert is considered the driest.  An oasis in the Ahaggar Mountains create an incredibly picturesque scene.

The majority of the desert is comprised of rocky hamada which is barren and hard.  The ergs, or collection of sand dunes, which the Sahara Desert is renowned for are actually limited to specific areas.  The most prominent areas occur in between Beni Abbes, Algeria and Ghadamis, Libya, the Great Western ergs and the Great Eastern ergs.  Ergs are frequently called seas of sand or sand seas.

What are the best ways to see the Sahara Desert?

Visitors can see the Sahara Desert by visiting any one of the 11 countries that contribute to the make up of the desert and allow visitors.  However, if there is a specific feature such as the egs, the mountains or one of the oasis pools then a more specific effort may need to be made.

Morocco is one of the leading destinations for seeing the sea of sands.  Camel excursions are used ti see the Erg Chigaga which is a 40 kilometer display of sand dunes.  You can also take camel treks or 4-wheel drive trips to see Erg Chebbi, which provides visitors with views of some of the largest dunes.

A visit to Tunisia provides travelers with access to the Grand Erg Oriental, which is an erg that exhibits one of the world’s largest seas of sand.

Egypt is a destination that provides experiences that expand beyond the Sahara Desert perspective.  Visitors will usually take 4-wheel drive excursions that take visitors into the desert where they can discover a fortress and temple dating back to Alexander the Great as well as a collection of oases that include: Al-Kharga, Farafra, Zerzura, and Dakhla.  These provide some amazing picturesque scenes.

What are the best ways to experience the Sahara Desert?

The majority of people who think about exploring or experiencing the Sahara Desert think about the seas of sands.  This means that probably the best way to experience the Sahara is by leveraging a camel trek or camel safari.  This is one of the most original and truly cultural experiences that speak to the reality of transportation and life in the Sahara.

Additionally, more adventurous people may find hiking or trekking in the dunes is a more personal encounter with this magnificent wonder.  Those looking to play may find sledding or surfing down the slopes of the dunes to be a thrilling endeavor.

One of the more common ways to experience the Sahara, particularly in Egypt, is through 4-wheel drive expeditions.  These let you venture further into the desert and experience more of what the Sahara has to offer.

The nighttime is sleeping on the sand.  Although you might opt to use a tent, many visitors elect to sleep outdoors directly under the skies where the full-effect of the stars and night sky can be taken in.  This is one of the best places, void of city lights, to see the expanse of the stars and sky.

The simple answer is hot and dry.  As the world’s largest and hottest dry desert, it is fair to expect extreme conditions.  The Sahara Desert is also known for being the sunniest place in the world, experiencing 3,000 to 4,000 hours of annual sunlight.  Egypt, Sudan, and Libya, top the desert area as the sunniest with over 4,000 hours of sunlight annually.

This annual level of sunshine means that visitors should expect it to be hot. The average temperatures for the Sahara range from 100.4 to 114.8oF with heatwaves taking temperatures up to around 129oF.

When is the best time to visit the Sahara Desert?

The best time to visit the Sahara Desert is going to be during the months between October through April.  It is during these months that the temperatures are most bearable.  However it should be noted that the nights during the months of December and January can get to freezing and slightly below.

You should avoid the months of June through September where the temperatures are just not worth making the trip.  Most people forgo visiting the Sahara during these months because simply stated it is just too hot to get out and experience the desert.

Photography Tips for the capturing the Sahara Desert

The best places that are accessible to the public for capturing pictures of the dunes and the sea of sands will occur in Morocco or Tunisia.  The one thing you can expect is lots of sunshine.  The best places to capture the oases of the Sahara will be in Egypt.

You will rarely have to battle anything that resembles a cloud.  Photographers should expect the challenge of shooting with the hot and brightly shining sun.  Filters and sun shades may prove helpful.