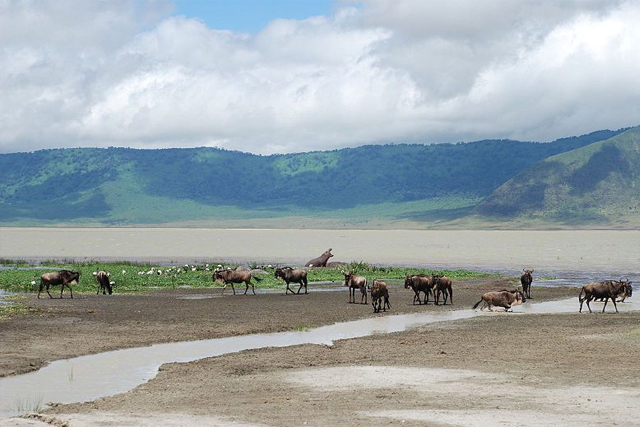 Ngorongoro Crater is a massive volcanic caldera located in Tanzania.  It is part of the Ngorongoro Conservation Area (NCA) which is also a distinguished UNESCO World Heritage Site.

During the declaration ceremony on February 11, 2013 in Arusha, Tanzania, Dr. Phillip Imler, President of Seven Wonders stated, “Ngorongoro Crater, affectionately called by some as Africa’s Garden of Eden, is one of the most intimate encounters with wildlife in the world.”  Learn more about what makes Ngorongoro Crater one of the Seven Wonders of Africa.

Statistically speaking, Ngorongoro Crater is the largest intact and unfilled volcanic caldera in the world.  The floor of the caldera expands 100 square miles (260 sq km) and is 2000 feet (610 m) below the rim.  There are estimates that indicate the original volcano could have reached a summit around 19,000 feet (5,800 m), which would have made it a rival of Mount Kilimanjaro.

Aesthetically speaking, Ngorongoro Crater is a scenic wildlife bowl.  The scenic overlook provides a breath taking view of the crater floor.  However, it is the wildlife encounters on the crater floor that make Ngorongoro Crater a true wonder.  There are around 25,000 large mammals including elephant, rhino, lion, leopard (usually on crater rim) buffalo and hippo accounting for six of the Big Seven.  The majority of the 25,000 large mammals are ungulates with the highlight being the elephants.  These elephants have large tusks and are part of the “Big Tuskers” of Africa.

The caldera is often considered an enclosed area that prevents animals from leaving, however this is not the case.  Wildebeests and zebra migrate through the crater annually with only small populations remaining year round.  The buffaloes migrate into the crater during the rainy season.  Other notable wildlife include:

In Ngorongoro Crater the animals are one with visitors allowing for close encounters.  The statistical significance combined with the intimate encounters with wildlife truly make Ngorongoro a “natural wonder.”

What are the best ways to see and experience Ngorongoro Crater?

There are a few lodges that are seated on the crater rim.  These provide great views of the crater floor, but are limited with their views of wildlife.  The scenic lookout and these lodges allow visitors to grasp the expanse of the caldera.

The best way to see and experience Ngorongoro Crater is with a safari drive in a 4×4 vehicle.  The majority of safari vehicles have roofs that elevate allowing travelers to stand and look out and even down (yes that close) upon wildlife.  The vehicles will navigate the different circuits (roads, crater areas) that provide visitors with different encounters with the varying wildlife.  Although the wildlife is free to roam about, they do have their preferred areas.

The rhino are most often found in the forested area and the plains just outside the forest.  Hippos are easy to find in the two hippo ponds, with one providing a more prominent view of the hippos.

Tanzania does not experience summer and winter seasons and the same is true for Ngorongoro Crater.  The consideration is about rainy versus dry season.  The “short rains” target the months of November and December with the “long rains” occuring during months of March, April and May.  Although it is weather and unpredictable, the months of January and February are usually drier months.  Temperatures average around 73oF (23oC) on the crater floor while evening temperatures fall to around 43oF (6oC).

During the months of the dry season that occurs between June and October, the temperatures on the crater floor average around 66oF (23oC). Temperatures can approach and even drop below freezing in the evening hours.

When is the best time to visit Ngorongoro Crater?

The short rains from November and December have also revitalized the plant life creating green grasses and brushes.  The flamingos have also migrated to the pond creating an amazing picturesque scene.  All the new babies and abundance of wildlife makes the predators more lively and prevalent.

The second best, while some say the best, travel season occurs during the months of June through October.  The reason some argue that this is the best is because the vegetation is more scarce which means the animals are more congregated for easier viewing.  There is less of a chance of rain during these months as compared to January and February, which can easily experience a shower.  One of the other highlights for this travel season is the absence of mosquitoes.  The drawbacks for this season are more crowds and colder evenings.

Here is a breakdown of the go / don’t go seasons of Ngorongoro Crater:

Collectively, the months of July through February are considered high season.  The short rains of November and December are normally short afternoon rains that quickly come and go.

The sunrise over the crater is best experienced from the decks of the Serena Lodge with the sunset being photographed from the Sopa Lodge.  The Ngorongoro Wildlife Lodge provides the best view of the crater floor overall and provides a great platform for capturing panoramic shots.

Safari guides tend to visit the hippo pool later in the day.  This is not good for photography because you are shooting into the sun.  If you are interested in photographing hippos and the birds of the hippo pond, you should ask your guide to make a morning visit.