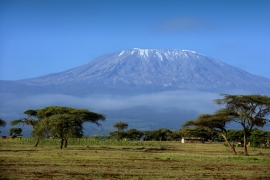 The Seven Natural Wonders of Africa were voted on by conservationist, naturalist and other experts from around the world. The winner wonders were declared on February 12, 2013 in Arusha, Tanzania. These winners represent some of the most amazing feats of nature from across the entire continent.

Discover and Explore. You are invited to discover and explore the winning Seven Natural Wonders of Africa. The winning wonders were determined based on statistical and traditional significance along with uniqueness and pure splendor.

Contest Questions: Which do you believe is the best or is your favorite? Are these blessings from God or treats from mother nature? Share, Tweet and Pin your responses.

Mount Kilimanjaro is a composite volcano comprised of lava, volcanic ash, and tephra. The mountain, affectionately called “Mt. Kili” or just “Kili,” was created from three different volcanic cones that include: Kibo, Mawenzi, and Shira. Kibo is the taller of the three and provides the Uhuru Peak, which is the highest or summit point of the mountain. Kibo also features a 1.5 mile wide crater.

The Sahara Desert is a dry desert located in the northern region of Africa. It is affectionately known as “the Great Desert” taken from the Arabic translation of the name. The desert extends from the shores of the Mediterranean in the North, the Red Sea in the East, to the shores of the Atlantic coast, to the tropical savanna of the Sahel in the south.

The Okavango Delta is an inland delta located in the country of Botswana. The delta extends across an area of 2,315 to 5,791 square miles (6,000 to 15,000 sq km). Approximately 2.64 cubic miles (11 cubic km) of water enter into the delta annually. That delta water grows during the rains in the highlands of Angola between the months of January and February. It then pours into the Okavango Delta between the months of March through June.

During the declaration ceremony on February 11, 2013 in Arusha, Tanzania, Dr. Phillip Imler, President of Seven Wonders stated, “Ngorongoro Crater, affectionately called by some as Africa’s Garden of Eden, is one of the most intimate encounters with wildlife in the world.” Learn more about what makes Ngorongoro Crater one of the Seven Wonders of Africa.

The Nile River is an international river that flows through 11 countries that include Rwanda, Burundi, Tanzania, Uganda, DRC, Kenya, Ethiopia, Eritrea, S. Sudan, Sudan and Egypt. This international river flows northward across much of the Sahara Desert. There are two major tributaries, the White Nile and Blue Nile, that work together to form the Nile River.

The Red Sea Reef is a diverse reef system located in the Red Sea, which is an inlet of the Indian Ocean. Although accessible from the Asian country of Israel. the reef is considered part of the African continent with proximity to the African coastline.