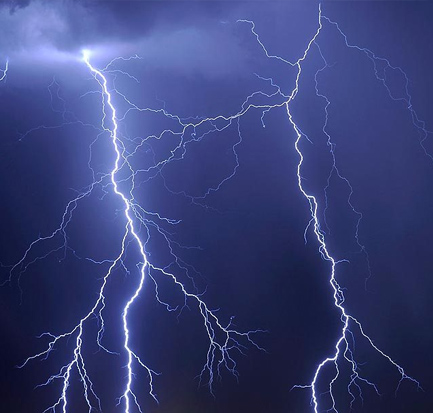 Lightening involves a large electrostatic discharge between the electrically charged areas of clouds.   These charged regions will momentarily equalize and in doing so create the lightning flash. There are three types of lightning including intra-cloud (IC), cloud to cloud (CC), and cloud to ground (CG).  Although it can be too far away to hear, thunder always follows lightening.

Statistics show that lightening strikes 40 to 50 times a second, which means there are up to 1.4 billion strikes annually.  Lightning happens the most in the mountains of the Democratic Republic of the Congo accounting for 158 lightning strikes annually.  Other regions where lightning typically occurs more often include: Venezuela, Singapore, northern Brazil, and the area called “lightning alley” in Central Florida.

Lightening creates a significant amount of heat and magnetic forces.  The force can cause a tree to explode, melt sand, soil or other ground matter, and kill animals and people.  Lightening can destroy buildings, cause power outages, and be the catalyst for forest fires.