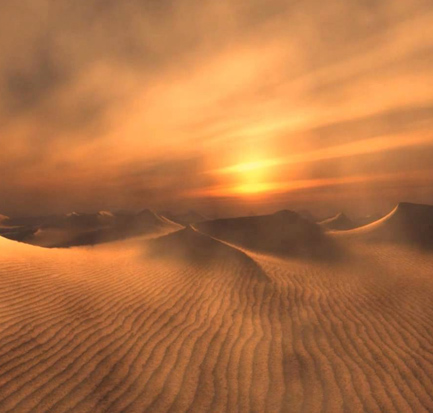 A sandstorm, also called a dust storm, is a massive meteorological mystery that commonly occurs in arid and semi-arid regions.  These sandstorms develop from a gust front or other strong wind blowing where loose sand and dirt are found.  Although sand storms can occur anywhere, they are most frequently described as storms in the desert.

The Sahara and dry lands of the Arabian Peninsula account for the majority of sandstorms, however they are also frequently found in Iran, Pakistan, India and China.  Sandstorms are caused from strong winds blowing over loose sand and other particles, which first begins to vibrate followed by saltation, and then suspension.

Dust storms can create a wall of sand and particles as much as a mile high.  Sandstorms have across Africa had increased 10 fold over the past half-century.  Mauritania experienced two sandstorms a year during the 1960s, whereas today they have approximately 80 a year.