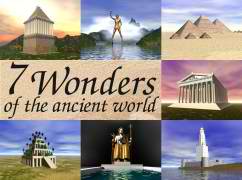 The Seven Ancient Wonders, as referred to today, were the original Seven Wonders of the World.  The original “wonders” were declared by Antipater of Sidon in 140 BC.  He was a Greek speaking epigrammist, and originally called them the “Seven Sights of the World.” The Greek word “theamata,” which translates “sights,” was used instead of “wonders,” but the point was still the same.  These were the best sights or wonders for travelers to see.

“I have gazed on the walls of impregnable Babylon along which chariots may race, and on the Zeus by the banks of the Alpheus.  I have seen the hanging gardens, and the Colossus of the Helios, the great man-made mountains of the lofty pyramids, and the gigantic tomb of Mausolus, but when I saw the sacred house of Artemis that towers to the clouds, the others were placed in the shade, for the sun himself has never looked upon its equal outside Olympus.”

You are invited to discover the Seven Ancient Wonders, the original Seven Wonders of the World.

The Giza Pyramids, also known as the Giza Necropolis, is a collection of pyramids on the Giza Plateau outside of Cairo. The Giza Necropolis includes the Great Pyramids, the Great Sphinx and several cemeteries. The Giza Pyramids have the distinction of being the only “Ancient Wonder” still in existence today. Additionally built around 2560 BC, these pyramids are is the oldest of the ancient wonders as well. The Great Pyramid stood at 481 feet (146.5 m) making it the tallest structure in the world for over 3,800 years.

The Temple of Artemis, also called Temple of Diana, was a Greek temple constructed to honor the goddess Artemis. The first sanctuary was built during the Bronze age, however it was later destroyed by flood. It was rebuilt three times before finally reaching its demise in 401. The temple was located near the city of Ephesus.

The Colossus of Rhodes was a Greek statue of the Greek god Helios. It was built in the city of Rhodes in 280 BC. The statue was erected to memorialize the victory of Rhodes of the king of Cyprus. It reached a height of 98 feet (30 m) making it one of the tallest statues of the ancient world. An earthquake in 226BC destroyed the statue only 56 years after being built.

The Mausoleum at Halicarnassus, also known as Tomb of Mausolus, was a tomb constructed in 350 BC. The tomb is located in Halicarnassus for Mausolus, who was a satrap in the Persian Empire. The Mausoleum stood around 148 feet (45 m) high and featured four sides that were crafted with sculptural impressions. Earthquakes between the 12th and 15th centuries destroyed it.

The Lighthouse of Alexandria, also known as Pharos of Alexandria, was a large tower constructed by the Ptolemaic Kingdom. Construction was completed in 247 BC. The tower reached a height of 450 feet (137 m). It was one of the tallest man-made creations for many centuries. Although it was the third longest surviving wonder, earthquakes destroyed it.

The Statue of Zeus at Olympia was a giant seated representation of Zeus. The statue reached a height of 43 feet (13 m) and was constructed in 435 BC. It was housed in the sanctuary of Olympia. The statue was created from ivory plates and gold panels that were placed over a wooden frame. It was further adorned with ebony, ivory, gold and precious stones. It was destroyed during the 5th century AD.