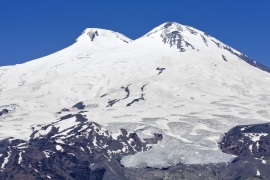 The Seven Natural Wonders of Russia were voted and confirmed by travellers and visitors from around the world.  The winners were declared on June 11, 2014.  Russia is a country abundant in wonders.  A separate campaign is underway for the Seven Wonders of Russia; an exploratory look at the man-made marvels of the country.

You are invited to discover and explore the Seven Natural Wonders of Russia noted below.

CONTEST QUESTIONS: Which one is the best? Are these Blessings from God or Treats from mother nature?  Share, Tweet, Pin your responses and let’s discover the answers.

Mount Elbrus is a dormant volcano located in Russia.  It is part of the Caucasus mountain range close to the border of Georgia.  The mountain features two summits, which were both cheated from separate volcanoes. Although some people dispute the boundaries between Asia and Europe, the majority of authorities state that Elbrus is located in Europe.

Klyuchevskaya Sopka is a stratovolcano located in the Kamchatka Peninsula.  It is inland about 60 miles from the Bering Sea and features a steep symmetrical cone.  It could be argued that it is nearly a perfect volcano. Klyuchevskaya Sopka is connected to the Volcanoes of Kamchatka  series, which also has the distinction of being a UNESCO World Heritage Site.

The Volga River is a river located in Russia and belonging to the closed basin of the Caspian Sea.  The source of the river starts in the Valdai Hills, which begin at an altitude of 738 feet (225 m).  The river meanders through Russia until it empties into the Caspian Sea.  The altitude at this point is 92 feet (28 m) below seal level.

The Lena Pillars are the highlight of the Lena Pillars National Park.  The Nature Park is located approximately 111 miles (180 km) southwest of the city of Yakutsk.  Various patches of pillars are scattered across almost 50 miles (80 km) of the right bank of the Lena River.

Manpupuner, is more often referred to as the Manpupuner Rock Formations.  They are also known as Seven Strong Men Rock Formations or Poles of the Komi Republic .  They consist of seven stone pillars that are uniquely distributed in the Ural Mountains.