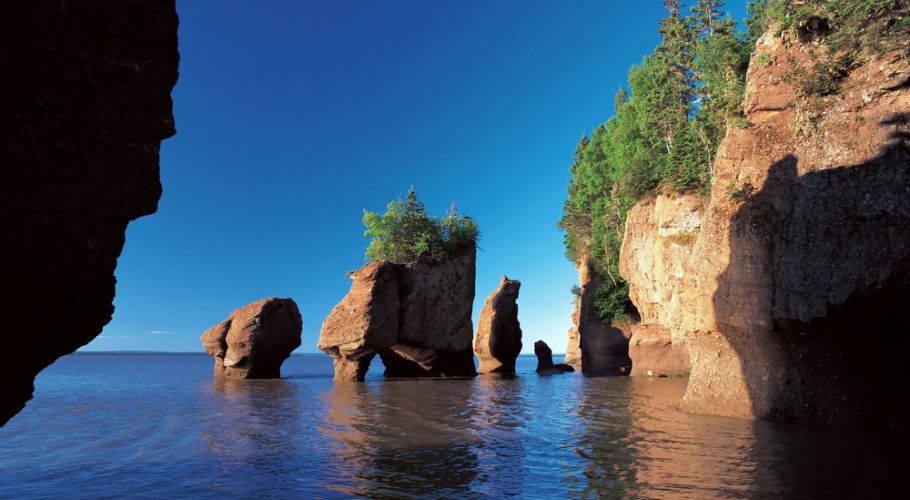 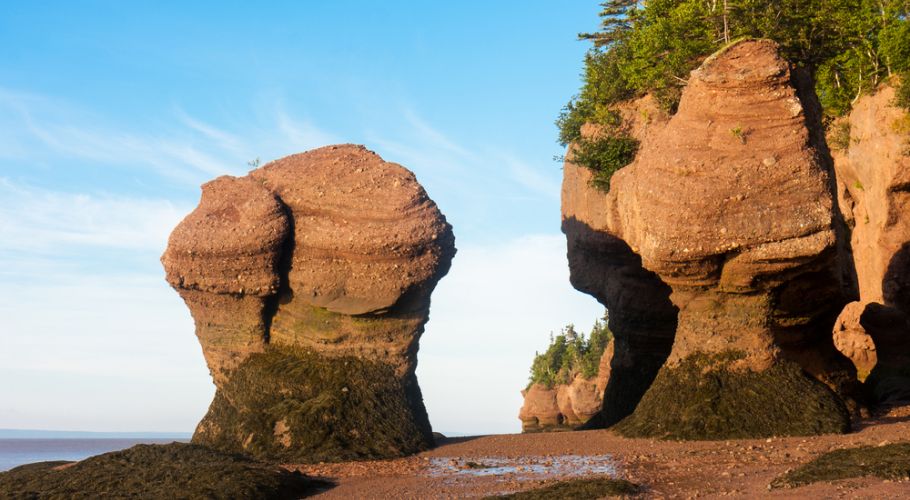 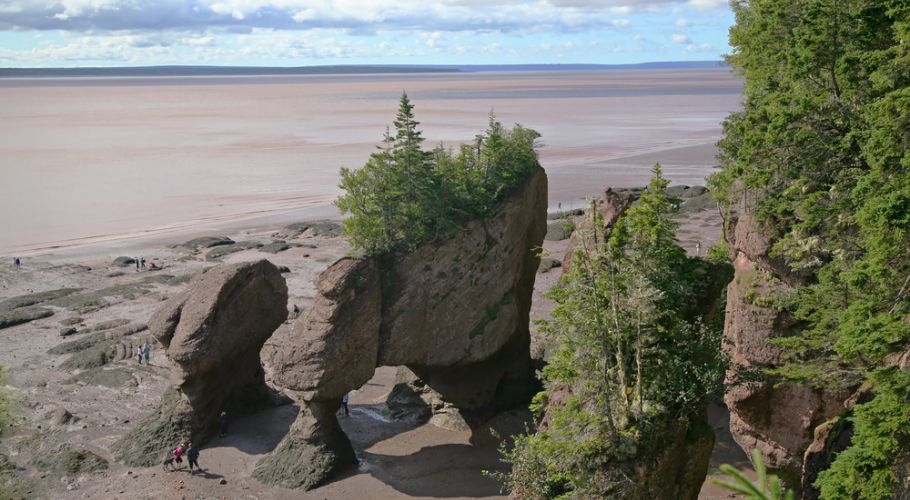 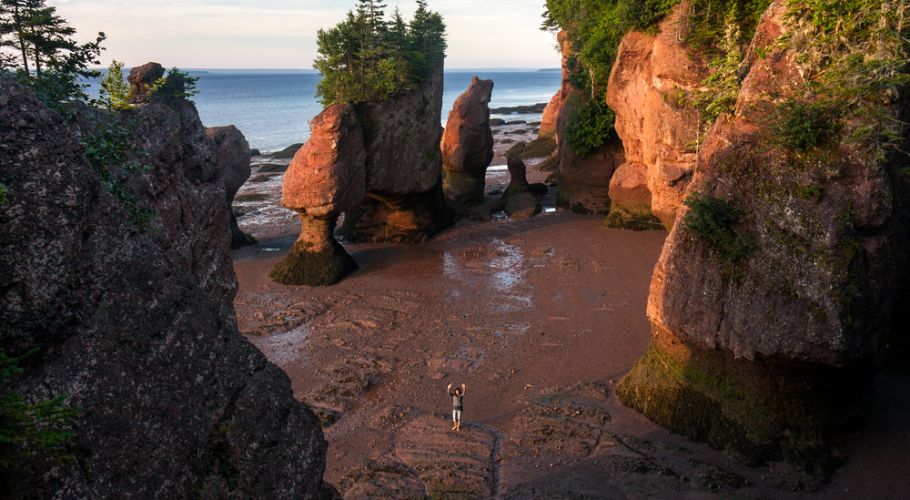 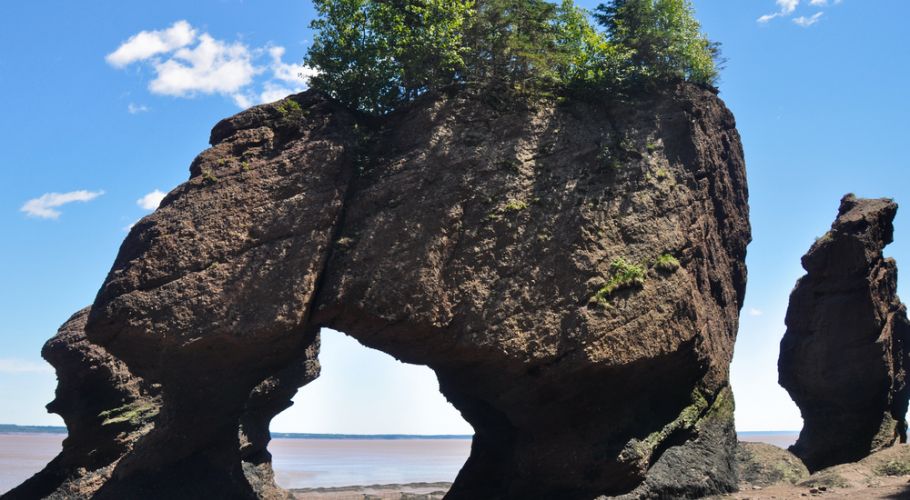 The Bay of Fundy is located on the Atlantic Coast on the northeastern end of the Gulf of Maine.  It is found between the Canadian provinces of New Brunswick and Nova Scotia.  A small portion of the bay touches Maine, in reality it is a wonder based in Canada.

You are invited to discover and explore the Bay of Fundy and learn what makes it one of North America’s Seven Wonders of Nature.

What makes the Bay of Fundy a natural wonder?

Statistically speaking, the Bay of Fundy is recognized as having the largest tidal range in the world.  Other tidal ranges compete for this recognition, but the distinction goes to the Bay of Fundy.  Burntcoat Head, within the bay, is the point that records the greatest tidal range.  Tidal changes typically see a difference of 47.5 feet (14.5 m), however tidal changes have been measured in extreme conditions at 53.5 feet (16.3 m).  The global record occured October 4 & 5, 1869 during Saxby Gale, a tropical cyclone, where tidal changes reached 71 feet.

The Bay of Fundy is part of six Canadian sites that serve as the Western Hemisphere Shorebird Reserve Network.

The Bay of Fundy features semi-diurnal tides which means there are two highs and two lows every day.  The height and the lows during each occurence represent the same tidal changes.  There is rarely much difference measured between the two times.

What are the best ways to see and experience the Bay of Fundy?

There is not much effort needed to see the Bay of Fundy.  It requires more patience as you watch the tide shift and begin to rescind to the seas.  It is more dramatic to see the tide out and low than risen and peaking.  One of the most popular places to observe the tidal changes is at the portion of the bay called Shepody Bay.  Here visitors will find the geological features called Hopewell Rocks.  These are rock formations that have been created through the erosion of the tidal changes and accompanying waves.

When the tides are rescinded, visitors can hike and climb among the Hopewell Rocks and exposed beach.  Families often find the beach fascinating as life is exposed with the waters gone.

When is the best time to visit the Bay of Fundy?

The tidal changes occur daily, so the phenomenon can be experienced at any time of the year.  The summer months of June through September are the best times to go because the weather is more comfortable.  Winter months combined with winds off the seas brings cold and uncomfortable temperatures.

Tourist activities are in full swing by the first of May providing visitors to this wonder of nature with other activities to engage in.  There is little reason to watch the tide change throughout the day.  As a visitor you can opt for choosing the time that is best for you.  The morning tidal change is probably the best time to shoot for watching the tidal changes. Then you can spend the rest of the day engaging in other activities.

Mid September to mid October will provide visitors with fall foliage in the surrounding area; this can be a nice addition to witnessing one of North America’s wonders of nature.

Photography tips for capturing the Bay of Fundy?

The most important piece of equipment is a tripod.  Capturing the Bay of Fundy and the phenomenal tidal change is best accomplished with time elapsed photography.  Hopewell Rocks provides some additional aesthetics to the images, but some of the piers that become completely exposed with boats sitting on the beach make for intriguing images as well.